In this series, we discuss a technique to find either the minima or the roots of a chaotic, unsmooth, or discrete function. A root-finding technique that works well for continuous, differentiable functions is successfully adapted and applied to piece-wise constant functions with an infinite number of discontinuities. It even works if the function has no root: it will then find minima instead. In order to work, some constraints must be put on the parameters used in the algorithm, while avoiding over-fitting at the same time. This would also be true true anyway for the smooth, continuous, differentiable case. It does not work in the classical sense where an iterative algorithm converges to a solution. Here the iterative algorithm always diverges, yet it has a clear stopping rule that tells us when we are very close to a solution, and what to do to find the exact solution. This is the originality of the method, and why I call it new. Our technique, like many machine learning techniques, can generate false positives or false negatives, and one aspect of our methodology is to minimize this problem.

Applications are discussed, as well as full implementation with results, for a real-life, challenging case, and on simulated data. This first article in this series is a detailed introduction. Interestingly, we also show an example where a continuous, differentiable function, with a very large number of wild oscillations, benefit from being transformed into a non-continuous, non-differentiable function and then use our non-standard technique to find roots (or minima) as the standard technique fails. For the moment, we limit ourselves to the one-dimensional case. 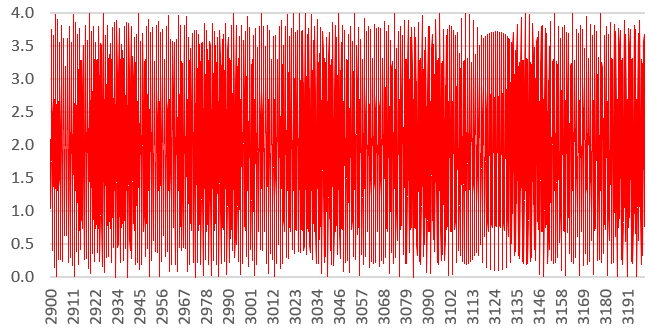 Despite the appearances, this function is well behaved, smooth, continuous and differentiable everywhere between b = 2000 and b = 4000 : this would be apparent if you could zoom in a few times on the picture. Yet, it is no surprise that classical root-finding or minimum-finding algorithms such as Newton-Raphson (see here) fail, or require a very large number of iterations to converge, or require to start very close to the unknown root, and are thus of no practical value. For instance, Mathematica can't find a global minimum even if you narrow down the search to 3000  <  b  < 3200, see here.

In this example, clearly f(b) = 0 in the interval 2000  <  b  < 4000 (and this is also the minimum possible value) if and only if b divides a. In other to solve this problem, we transformed f into a new function g, which despite being unsmooth, lead to a much faster algorithm. The new function g, as well as its smoothed version h, are pictured below (g is in blue, h is in red). In this case, our method solves the factoring problem (factoring the number a) in relatively few iterations, potentially much faster than sequentially identifying and trying all the 138 prime divisors of a that are between 2000 and 3083. However, this is not by far the best factoring algorithm as it was not designed specifically for that purpose, but rather for general purpose. In a subsequent article part of this series, we apply the methodology to data that behaves somehow like in this example, but with random numbers: in that case, it is impossible to "guess" what the roots are, yet the algorithm is just as efficient.

2. Fundamentals of our new algorithm

This section outlines the main features of the algorithm. First, you want to magnify the effect of the root. In the first figure, roots (or minima) are invisible to the naked eye, or at least undistinguishable from many other values that are very close to zero. To achieve this goal (assuming f is positive everywhere) replace a suitably discretized version of f(x) by g(x) = log(ε + λf(x)), with ε  >  0 close to zero. Then, in order to enlarge the width of the "hole" created around a root (in this case around b = 3083), you use some kind of moving average, possibly followed by a shift on the Y-axis.

The algorithm then proceeds as fixed-point iterations: bn+1 = bn + μ g(bn). Here we started with b0 = 2000. Rescaling is optional, if you want to keep the iterates bounded. One that does this trick here, is bn+1 = bn + μ g(bn) / SQRT(bn). Assuming the iterations approach the root (or minima) from the right direction, once it hits the "hole", the algorithm emits a signal, but then continue without ever ending, without ever converging. You stop when you see the signal, or after a fixed number of iterations if no signal ever shows up. In the latter case, you just missed the root (the equivalent of a false negative).

The signal is measured as the ratio (bn - bn-1) / (bn+1 - bn), usually close to one, but which dramatically spikes just after entering the hole, depending on the parameters. In some cases, the signal may be weaker (or absent or multiple signals), and can result in false positives. In some cases, the second signal (when present) corresponded to the second root. Even if there is no root but a minimum instead, as in the above figure, the signal may still be present. Below is a picture featuring the signal, occurring at iteration n = 22: it signals that b21 = 3085.834 is in close vicinity of the root b = 3083. The X-axis represents the iteration number in the fixed point algorithm. How close to a root you end up is determined by the size of the window used for the moving average. A large window increases your chances to find the root, but the price to pay is less accuracy, possibly a weaker signal, and a lot more computations.

The closest to my methodology, in the literature, is probably the discrete fixed point algorithm, see here. To provide an analogy to physicists, it is a bit like the "hole" is a black hole, attracting massive objects that progress around it for some time, then get absorbed, emitting a radio signal when that happens, as the only proof revealing the existence of the black hole. The closer to zero ε is, the deeper the hole, and "abyss" may be a better word to describe it. Another, possibly more realistic way to describe it, is a rocket flying into space, then approaching a massive object (giant planet, or the sun), and getting its straight path seriously deflected after the encounter. The rocket continues to fly indefinitely after the encounter (just like my iterations of the fixed point algorithm continue indefinitely to nowhere after the encounter with the hole, thought on many occasions they will oscillate for a long time around a root - the hole - before eventually moving away). But the path deviation produced by the massive planet indicates that the rocket got close to a massive object, or equivalently in our case, the signal indicates we got close to a root of the function of interest.

All the details will be provided in the next articles in this series. To not miss them, you can subscribe to our newsletter, here. We will discuss the following: