We study the properties of a typical chaotic system to derive general insights that apply to a large class of unusual statistical distributions. The purpose is to create a unified theory of these systems. These systems can be deterministic or random, yet due to their gentle chaotic nature, they exhibit the same behavior in both cases. They lead to new models with numerous applications in Fintech, cryptography, simulation and benchmarking tests of statistical hypotheses. They are also related to numeration systems. One of the highlights in this article is the discovery of a simple variance formula for an infinite sum of highly correlated random variables. We also try to find and characterize attractor distributions: these are  the limiting distributions for the systems in question, just like the Gaussian attractor is the universal attractor with finite variance in the central limit theorem framework. Each of these systems is governed by a specific functional equation, typically a stochastic integral equation whose solutions are the attractors. This equation helps establish many of their properties. The material discussed here is state-of-the-art and original, yet presented in a format accessible to professionals with limited exposure to statistical science. Physicists, statisticians, data scientists and people interested in signal processing, chaos modeling, or dynamical systems will find this article particularly interesting. Connection to other similar chaotic systems is also discussed.

1. The Geometric System: Definition and Properties

We consider the infinite series

where X(1), X(2) and so on are independently and identically distributed random variables. We use the notation X to represent any of these random variables. Let F denotes the distribution function. This system satisfies the following functional equation:

This can be re-written as

The latter formula can be used to compute all the moments recursively. In particular,

1.1. Parameter estimation and test for independence

1.2. Connection to the Fixed-Point Theorem

We focus here on special cases, where X has a discrete distribution. In particular, we prove the following:

Here X and Z are discrete. Using the notation

we have, based on the definition of Z:

2.3. Not any distribution can be an attractor

To prove the converse, note that in order for Z to be uniform on [−1,1] then we must have E(X^k) = 1 / 2^k if k is odd, 0 otherwise. The only distribution having these moments is the distribution discussed at the very beginning of section 2.4.

The functional equation in section 1 can be re-written as

The empirical percentile distribution attached to Z is pictured below. 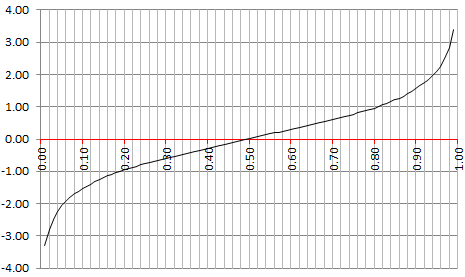 Despite the appearances, it is possible that the distribution of Z, though visually very smooth, may be differentiable nowhere, and that the density, at least in classical terms, does not exist. I conjecture that it does in this example. For instance, in a similar stochastic system based on infinite nested square roots, it was found that some attractors (the limiting distributions) are almost smooth but with a distribution differentiable nowhere, despite being continuous mostly everywhere: see here for details. This is especially the case when the seed distribution (X in this case) is discrete, particularly when it takes only on a finite number of values. In some cases, even the support domain for Z has gaps, sometimes visible, large ones: see here. However, here the distribution and its support domain look well behaved, and even very well approximated by a uniform distribution for z between -1 and 1.

Similar distributions have been analyzed by David Bailey in his book Experimental Mathematics in Action, published in 2007. In particular, sections 5.2 and 5.3 (pages 114-137) are very relevant to this context. One of the densities he has studied, namely 2qf(z) = f((z-1) / q) + f((z+1) / q), is very similar to the one I studied in my article A Strange Family of Statistical Distributions, and the functional equation for f is somewhat similar to the one discussed in this section. All these problems end up in attractors and functional equations like the one discussed here.

3.1. Towards a numerical solution

A possible way to find a numerical solution is as follows. Rather than focusing on the density f, we focus on its distribution. Build a sequence of distributions that are piecewise uniform on the support domain, starting in this particular case with

At iteration n > 1, the approximated solution (distribution) is piecewise linear on n disjoint contiguous intervals (these intervals eventually cover all the real numbers as n tends to infinity). Its value is always between 0 and 1, and it must be a strictly increasing function. It is chosen to minimize an error criterion, defined as

In short, you want the n-th iterate to be as close as possible to solving the theoretical functional equation of this system, while being piecewise uniform on n domains, and that successive iterations reduce the error, eventually to zero as n tends to infinity. Here X has the distribution specified at the beginning of section 4, and g(X, Z) = X (1 + Z) is at the core of the functional equation defined at the very beginning of section 1. Of course this assumes that the solution satisfying these constraints is unique. It also assumes that the algorithm in question converges to the solution. Techniques about how to solve this problem are described in my article New Perspectives on Statistical Distributions and Deep Learning.

This section can be skipped. It features two interesting exercises, with solution, to help the reader dig deeper into the material presented so far.

Let X = sin(πY) with Y being Normal(0, 1). Simulate Z, and estimate its variance based on 20,000 deviates. Prove that Var(Z) is not equal to 1, despite the very strong empirical evidence.

4.2. Is the log-normal distribution an attractor?

Using simulated values of Z based on X being log-normal, show that Z looks almost like log-normal too. However, it is just a good approximation, but not an exact solution. Prove that Z is not log-normal.

These values are obtained using the following formulas:

Here we explore cases that are far more chaotic than the well behaved examples of sections 2 and 3. These cases have a common denominator with other chaotic statistical systems, and we explore some of these connections.

5.1. Numbers made up of random digits

This establishes the reciprocity and one-to-one mapping between the binary numeration system and the representation of Z introduced at the beginning of section 1. If you pick up a number Z at random, its binary digits are independently and identically distributed with a Bernoulli distribution of parameter p = 0.5. Such numbers, called normal numbers,  are thus uniformly distributed, as the main result in section 2.4 suggests. Non-normal numbers are extremely rare: the set of non-normal numbers has Lebesgue measure zero. Examples include the case when p ≠ 1/2. We explore this case in the next section. 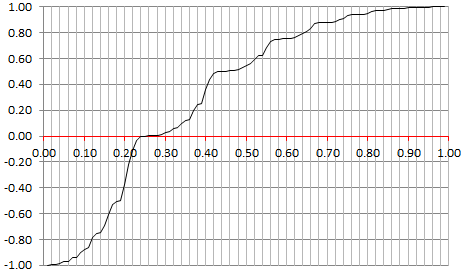 This is the same type of distribution as the one featured in section 1 in this article, associated with a random number that does not have 50% of its digits equal to 1 in base 2.

In such cases where the distribution of Z is difficult to identify, one might use the Mellin transform M(Z) to solve the functional equation, if both X and Z are positive. Here we have M(Z) = M(X) M(1 + Z). Mellin transforms are similar to characteristic functions (themselves based on Fourier transforms). If X and Y are independent, then M(XY) = M(X) M(Y), while the characteristic function CF(X +  Y) is equal to the product CF(X) CF(Y). See also the Wikipedia article on the product distribution, here. However, as mentioned in section 3.2 in this article, neither the Mellin nor the Characteristic Function may exist in such irregular cases. 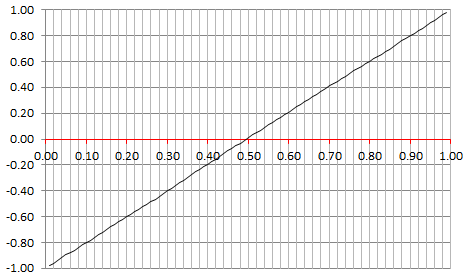 Here we discuss a totally different system, but closely related to our discussion in section 5.1. The purpose is to show how striking the similarities are, between what appears at first glance to be two unrelated systems.

The algorithm to find the X(k)'s is a simple version of the greedy algorithm. It is also related to Feynman's algorithm, see here. If all the X(k)'s are equal to 1, then Z = 2.384231029... and 1 - 1/Z is Pell's constant: see here, here and here. A number can have two representations, a standard and a non-standard one, for instance:

The standard one is on the left-hand side. As usual, we use the notation X to represent a generic X(k), since those are also (by definition) all independently and identically distributed. Below is the distribution (CDF) of Z, in blue, if X is Bernouilli(0.5). The red curve represents its approximation by a logarithmic function. 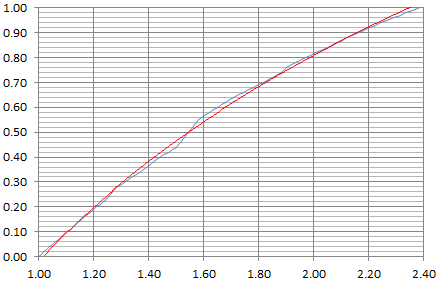 The approximation for Z's CDF in Figure 4 is equal to (log z) / (log λ), and the support domain is [1, λ] where λ = 2.384231029... is the constant discussed earlier in section 5.3. Now this is becoming very interesting: compare this chart with the one obtained for continued radicals in section 2.2 in this article. How similar! Below is the error term, that is, the difference between the log approximation and the exact CDF. 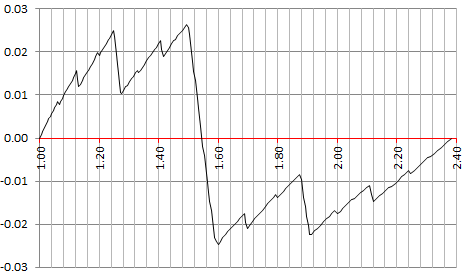 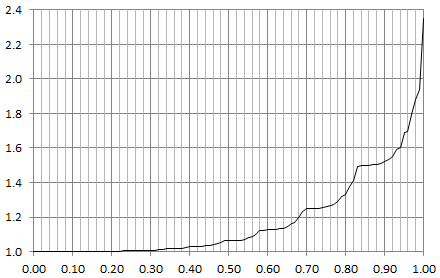 Over the last few years, I have analyzed many systems similar to the ones discussed here. A summary table can be found here. Many but not all are related to numeration systems. For details see my book Applied Stochastic Processes published in 2018, as well as Appendix B (Stochastic Processes and Organized Chaos) in my book  Statistics: New Foundations, Toolbox, and Machine Learning Recipes published in 2019. See also the following articles:

I am currently studying a new system, based on the discrete difference operator. You can see my research progress here and here.  It will soon be published in a new article, and all these articles will soon be turned into a new book. I have discovered that all these systems share a number of common features: attractor distributions, functional equations, chaotic statistical distributions, fractal behavior, and auto-correlations (long range or quickly decaying). Below is a first attempt at classifying the various types of attractors found in these systems. In many cases where Z has a continuous distribution, it looks like the limiting distribution can sometimes be normal, or at least very smooth. If Z has a discrete distribution, we have several possibilities, see below.

In some of the chaotic cases, the distribution has a fractal behavior (see section 2.2 in this article.)